8 Reasons Why God Does Miracles 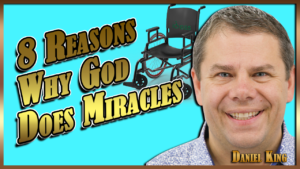 Miracles prove the reality of God’s existence. Mentally, I questioned the existence of God, until I began seeing miracles. The problem with this is that once you have proof, you no longer need faith.

Saint Augustine, one of the great Christian thinkers said, “I should not be a Christian but for the miracles.” Marilyn Hickey told me “Miracles are like the dinner bell which calls people to the banqueting table.” Miracles are God’s advertisement system.

One of the Hebrew words for miracles is also used for a banner on top of a tall pole. Because it is up so high in the air, it enables the banner to be seen from a long distance. God performs mighty signs so people who are not close to Him can see a manifestation of His presence.

John wrote, “Jesus did many other miraculous signs in the presence of his disciples, which are not recorded in this book. But these are written that you may believe that Jesus is the Christ, the Son of God, and that by believing you may have life in his name” (John 20:30‑31 – emphasis added).

When a school applies for accreditation, it must prove it is a good school. Peter preached, “Jesus of Nazareth was a man accredited by God to you by miracles, wonders and signs, which God did among you through him” (Acts 2:22). God used miracles to prove Jesus was authentic.

The writer of Hebrews said, “Salvation… was confirmed to us by those who heard him. God also testified to it by signs, wonders and various miracles, and gifts of the Holy Spirit distributed according to his will” (Hebrews 2:3-4).

Many times, our Father does miracles simply because He cares for His children (Matt. 9:36).