A Monument to Soul Winning 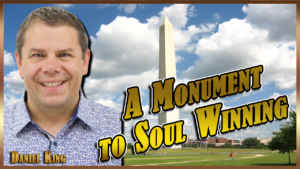 You will never believe what was covered up for 100 years.

Recently, I read this wonderful story:

“The Washington Monument (169 meters tall) in Washington D.C. was started in 1848 and finished in 1884. It opened to the public in October of 1885. During a recent renovation of the lobby, construction workers found some graffiti from the 1800’s which has quite a different tone from that usually found today on the sides of buildings and subway cars:

‘Whoever is the human instrument under God in the conversion of one soul, enacts a monument to his own memory more lofty and enduring than this.’ reads the inscription which can now to viewed by visitors to the monument. It is signed BFB. No one know who that is, or who left the small drawings and 19th century dates on the other walls.

The markings in the lobby of the monument were covered over when it was decorated at the turn of the century. They were found when workers removed marble wainscoting as part of a year long $500,000 renovation which was recently completed.”

It is true. Winning one soul to Christ is a much greater monument than anything you can build here on earth. Soul winning is the only investment that will matter ten thousand years from now.

We are a soul-winning ministry. Your giving helps us lead people to Jesus. Thank you for helping us erect eternal monuments for the King of Kings!