A Reservation in Hell: A Short Story By Daniel King

A Short Story By Daniel King

It was a boring day at Hell’s check-in desk. Only a teenage drunk driver and a Hindu guru had checked in so far. It was not 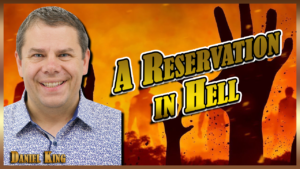 like yesterday when a suicide bomber and his victims arrived. Then the flames had been roaring and a full contingent of demons had been present to drag everyone to the torture chambers. But, for now, the flames smoldered in the darkness and reflected off the brass, maggot eaten nameplate sitting on the desk. Just barely, the name could be seen. William Zane Bub.

The red-faced, deformed demon looked up from his desk and wiped the sweat from his forehead. What was the annoying sound that was disturbing his rest?

“Ring,” blasted the sharp, piercing noise of the antique telephone sitting next to his elbow. Lethargically, he stretched out his claw and grabbed the handset.

In a tired, rebellious voice, he began to sing the jingle management forced him to recite when answering the phone, “Hell, Hell, Hell, Hello. We’re looking foreword to seeing you below. Hell, hell, hell, hello, where the flames are bright and time goes slow…” He decided not to sing the other ninety-four poorly written verses of the hotel’s theme song.

“My enemies call me Bill,” the demon interrupted, “hold for a second, let me find you in the computer.” Bill tapped on his keyboard only to find that the computer had performed an illegal function and had gone into semi-permanent hyphenation. “Stupid computer demons,” he muttered to himself, “those bugs they programmed into this operating system are purely diabolical.”

Finally, John Smith’s info came flickered into life on the screen. Bill took a moment to look over the profile then he spoke into the telephone, “John, I have you right here, it says you were born July 9, 1978, is that correct?”

“Yes,” said John with relief in his voice. The rock music playing while he was on hold was ear splittingly loud and badly out of tune.

“Right, I have your reservation right here. It looks like you made this reservation the first time you lied to your mom when you were three years old.”

“We have you scheduled to be in the Mausoleum Suite.”

Bill chuckled to himself. Here was an opportunity to use the worst of his puns. “You know, people are dying to get in there. Don’t laugh, this is a grave matter. I’m dead serious. Do you know why funerals are so sad? It because six of your best friends let you down,” He waited for the groans but when only silence ensued, he continued, “but on a lighter note, I could put you in the Crypt Chamber.”

“Nonsense, of course you’re coming. Everyone comes. As a matter of fact, you’re scheduled to be with us sometime next year. I’m sending Agent Death to pick you up real soon. You’ll be able to recognize him, he’s the one with the big sickle. Ha, ha.”

“You are not listening to me, I do not want to come,” John reiterated forcefully.

“Very common response, but you really have no choice, besides, the worms are ready to eat.”

“No, of course not sir, the worms eat you. Ha, ha! By the way, do you like rare, medium, or well done…actually, there’s not really an option. We keep the flames so hot that everyone is well-done.”

John was not getting through to Bill. “I am not coming to Hell Hotel.”

“But, you’ve already paid a high price for this reservation.

Bill tapped away at the keyboard for a moment, “So far, your reservation in hell has cost you your health, your wealth, and according to a note here, for your next installment on your payment plan, it will cost you your marriage.”

“I had no idea it was costing me so much.”

Bill gloated, “Well, sir, we try to give you a foretaste of hell, by giving you a little hell on earth.”

“We don’t give refunds, your investment in this reservation is non-refundable.”

“I want more than a refund, I want a seven-fold return.”

Bill paused for a moment. Where had John heard about that clause? It was hidden in the smallest of the small print at the bottom of the contract. Few knew they could demand a seven-fold return on Hell’s prices. Perhaps it was a fluke, he would be careful. “What are you talking about?”

John took a breath and started to explain, ‘Last week, one of my business associates invited me to go to church with him.”

Bill began to squirm, “You didn’t go, did you?”

“The people were friendly, the music was nice, and the sermon was interesting.”

Bill breathed a sigh of relief, it sounded like the hundreds of churches where nothing ever really happened on a typical Sunday.

Then he caught his breath as John continued. “After the sermon, the preacher started talking about sin and salvation. I thought about all the wrong things I’ve done and when he asked if anyone wanted to give their lives to God, I raised my hand.”

Furiously Bill said, “You what?”

“You can’t…I mean, why…Why are you calling me?”

Bill Z. Bub cringed as he listened to John yell, “Because, I’M CANCELING MY RESERVATION IN HELL!”