Loyalty is “consistently demonstrating support for something or someone.”  It is “a strong feeling of support or allegiance.” Loyalty is one of the most neglected character traits in the world today. Fifty years ago, people stayed in the same job for their entire careers. They were loyal to their employers and their employers were loyal to them. Now, it is common for people to jump from job to job. People also jump from church to church, and even from spouse to spouse.

Loyalty is very important to me. I started attending Victory Christian Center when I was six years old and now that I am forty-two, Victory is still my home church. Several years ago, the founding pastor of the church, Billy Joe Daugherty went to heaven and many people left the church. My family stayed faithfully through thick and thin. Now people are starting to come back, but we never left. Why? Because I value loyalty.

My wife Jessica and I have been married for almost fourteen 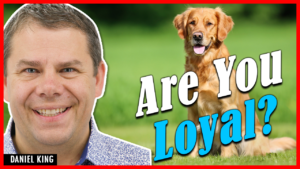 years. Our marriage has gone through rough patches, but we are still together. Why? Because when we got married, we promised each other that we were committed to one another no matter what. Our loyalty to one another is more important than any temporary disagreement.

I have seen friends come and go. When friends leave my life, it often causes me deep pain. I want to be loyal to my friends and in return I expect them to be loyal to me. When I find that someone is a fair-weather friend, and they leave me when things get tough, it is hurtful. But, I am deeply thankful for the friends who are loyal to me and who continue to support me in the midst of difficult times. The key to loyal friendships is long-term commitment. This is the type of friend I am looking for.

One of history’s greatest examples of disloyalty was when Brutes stabbed Julius Caesar in the back. Caesar thought Brutes was his friend and he was surprised when his “friend” joined his enemies and stabbed him. The moment was immortalized by Shakespeare in his play when Julius Caesar says, “Et tu Brute?” (You too Brutes?). I agree with the person who said, “Loyalty isn’t grey. It’s black and white. You’re either loyal completely, or not loyal at all.”

In the Bible, there are many examples of people who are loyal and others who are disloyal. For example, in the book of Judges, the people followed God and then walked away from Him. This happened repeatedly. God sent judges to lead them and for a time the people were delivered from their enemies but when the judge died, the people turned away from God and fell back into sin. This tendency to be disloyal is documented in Judges 8:35, “They also failed to show any loyalty to the family of…Gideon…in spite of all the good things he had done for them.”

David was grateful for the loyalty of the soldiers of Zebulun. The Bible documents their loyalty in a list of solders who fought with King David, “from Zebulun, experienced soldiers prepared for battle with every type of weapon, to help David with undivided loyalty—50,000” (1 Chronicles 12:33 NIV).

The Apostle Paul experienced both loyalty and disloyalty. Hear his lament towards the end of his life when he was in prison in Rome, “…everyone in the province of Asia has deserted me, including Phygelus and Hermogenes” (2 Timothy 1:15 NIV), and rejoice with him for the faithful loyalty of another, “May the Lord show mercy to the household of Onesiphorus, because he often refreshed me and was not ashamed of my chains. On the contrary, when he was in Rome, he searched hard for me until he found me. May the Lord grant that he will find mercy from the Lord on that day! You know very well in how many ways he helped me in Ephesus. (2 Timothy 1:16-18 NIV).

The most loyal person in the world is Jesus Christ. He promised, “And surely I am with you always, to the very end of the age” (Matthew 28:20). Jesus is one friend you can always count on. The Apostle Paul knew this truth when he wrote, “For I am convinced that neither death nor life, neither angels nor demons, neither the present nor the future, nor any powers, neither height nor depth, nor anything else in all creation, will be able to separate us from the love of God that is in Christ Jesus our Lord” (Romans 8:38-39).

Loyalty builds trust, and trust is essential for success. The key to building loyalty in relationships is by continually putting money in the friendship bank. It is important to look out for people who look out for you. Loyalty is everything.

Loyalty is not blind to wrong doing but loyalty is being kind enough to share the truth. Loyalty is sharing the truth even when it is hard. One person said, “Loyalty means I will be with you whether you are right or wrong, but if you are wrong, I will tell you and will help you make it right.”

Loyalty means being committed for the long haul. If they stand by you during the bad times, they deserve to be with you during the good times. There is a saying, “You gotta dance with the one that brought you.” For example, David and Jonathan made a covenant together. When they first made the covenant, Jonathan was the king’s son and David was just a shepherd boy. But, later David became king and he honored the covenant by taking care of Jonathan’s son, Mephibosheth (2 Samuel 9:7).