Are You Ready for Death?

This is the story of a late, lamented squirrel.  When I was in college someone played a joke on my dorm. One morning we woke up and found a dead squirrel in the toilet. An unknown perpetrator had found this poor squirrel out in the gardens and as a practical joke they brought the squirrel inside and left it in the toilet. When I first saw the squirrel, it appeared to have drowned itself. His fluffy tail was hanging out over the edge of the toilet and it looked quite pitiful. 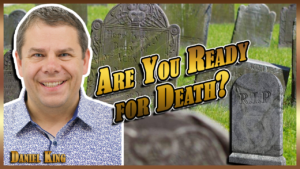 Someone from our dorm promptly put up a sign which proclaimed that the squirrel was the Dorm Mascot. We nick-named him Earl the Squirrel. Then, someone “found” a suicide note from the squirrel. The suicide note read, “I am tired of life. The blue jays keep eating the nuts I have stored so carefully. Nothing can satisfy me anymore. So long, fair world, I’ll not be seeing you again.”

One of my friends from down the hall proceeded to write an obituary for the dead nut-eater. It informed the wing that, “Earl T. Squirrel died today at nine in the morning. He is survived by his wife, Erma, and three children. Police have ruled his death accidental. Once considered to be the Dorm Mascot, he will be greatly missed by all. Memorial Services will be held at 1:30. All are invited to come.”

Our dorm had a bunch of fun lamenting the late, great life of Earl T. Squirrel. It was a tragic death. We held a Memorial Service in his honor and grieved deeply over his passing.

Why am I telling you this story? It is because I want to address the issue of death.

Death is a morbid subject. Most people do not like to think about death or dying. But as they say, “Death is a part of life.” All to many depressed people have thoughts of committing suicide and for the rest of us death can come unexpectedly.

Solomon told us, “There is a time for everything, and a season for every activity under heaven: a time to be born and a time to die….” (Ecclesiastes 3:1-2). Everyone is promised death. Everyone will die someday, the question is, “Are you ready to die?”

For a Christian, death holds no fear. Paul asked, “O death, where is your sting?”(1 Cor. 15:55). For “to be absent from the body is to be present with the Lord” (2 Cor. 5:8). Jesus defeated death, hell, and the grave and everyone who makes Jesus the Lord of his or her life will “shuffle off these mortal coils” and go to live in heavenly glory for all of eternity.

The alternative is horrible though. Eternal punishment waits in the pits of hell for those who have rejected God. Jonathan Edwards observed, “There is nothing that keeps wicked men at any one moment out of hell, but the mere pleasure of God.” We never know when death will come. For several of my friends this year, death has come unexpectedly. Each one of us needs to be sure we are ready for death.

I would like to ask you the classic witnessing question, “If you died tonight, where would you go?” Are you ready to meet your maker? When you see God, will he say “Well done, my good and faithful servant.” or will he command, “Depart from me, for I never knew you?”

All have sinned and fallen short of the glory of God (Rom. 3:23). With sin in our hearts, eternal life becomes impossible. God, because of His holy nature, cannot tolerate sin. God has proclaimed “The wages of sin is death” (Rom. 6:23). But the good news is that God has made a way for each human being to live forever. “The gift of God is eternal life in Christ Jesus our Lord” (Rom. 6:23).

Jesus was the only man to live a perfect life without sin. He was viciously crucified on a cross; dying for the sins of the entire world. Jesus died so we could live. He paid the price God’s justice demanded for our sins. Now, if we choose to accept the work Jesus accomplished on the cross, our sins will be forgiven. “If you confess with your mouth, ‘Jesus is Lord,’ and believe in your heart that God raised him from the dead, you will be saved” (Rom. 10:9).

“Everyone who calls on the name of the Lord will be saved (Rom 10:13). If you want to make your life right with God, I want you to purpose in your heart that you will serve Him. Pray this prayer with me.

“Dear Father, I repent for all the wrong I have done. I believe in my heart that God has raised Jesus from the dead. I confess with my mouth that Jesus is Lord over my life. God, I will serve you as long as I live. In the name of Jesus, Amen.”

The Bible promises that those who know God will have their names written in the Lamb’s Book of Life. This means that you will never have to be worried about death again. For “Our Savior, Jesus Christ. . . has destroyed death and brought life and immortality to light through the gospel” (2 Tim. 1:10). In the movie Braveheart, the hero tells us, “Every man dies, but not every man truly lives.” I exhort you to live your life for Christ; serving Him with all of your heart, mind, body, and soul. Death has no power over a child of God because when we live, we live for Christ, and when we die we gain immeasurable eternal riches!

By the way, I know you are all wondering what happened to Earl the Squirrel. Eventually someone came from maintenance and fished him out of the water. I do not know for sure what they did with him, but I think they took the squirrel down to our cafeteria where they threw him into some stew.