Choking an Elephant to Death 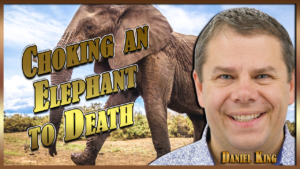 In Africa there are many ant colonies. One ant colony was regularly attacked by a rogue elephant. Every time the ants finished building their colony, the elephant would destroy it with his massive feet.

One day, the ants were so tired of rebuilding that they called a committee meeting. They decided to defend their home by climbing a tree together. When the elephant passed by underneath, they planned to jump from the tree, land on the elephant, and sting it to death.

So, they put their plan into motion. They climbed the tree and as the elephant was walking by, the leader gave the signal. All the ants jumped down onto the elephant’s back. But the elephant just shook his back and all the ants went flying.

The ants were all discouraged but then they looked up and saw one ant that was still hanging at the elephants neck. All the ants started jumping up and down and shouting, “Choke him, choke him.”

Sometimes, I feel just like that ant who was trying to choke the elephant to death. I am trying to save the world, meanwhile all the churches in the United States are shouting “Evangelize the World, Evangelize the world.”

It takes more than ONE person to save the world! We need your help. Thank you for standing with us and helping us to “choke” this elephant sized problem of world evangelization. Your gift is celebrated! Thank you so much!