Does God Cause Suffering?

Even though God’s ultimate and perfect will is for His children to be blessed, since we live in a fallen world, God’s children still suffer. As long as we live in this fallen world, there will be suffering. Jesus suffered on the cross. Paul suffered as he traveled and preached the Gospel. “To this very hour we go hungry and thirsty, we are in rags, we are brutally treated, we are homeless” (1 Corinthians 4:11 NIV). Yet, despite his suffering for the sake of the Gospel, Paul learned to be content in every circumstance. “I am not saying this because I am in need, for I have learned to be content whatever the circumstances. I know what it is to be in need, and I know what it is to have plenty. I have learned the secret of being content in any and every situation, whether well fed or hungry, whether living in plenty or in want” (Philippians 4:11-12 NIV). 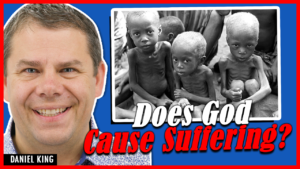 In this world, the believer is promised persecution. “Blessed are you when people insult you, persecute you and falsely say all kinds of evil against you because of me. Rejoice and be glad, because great is your reward in heaven, for in the same way they persecuted the prophets who were before you” (Matthew 5:11-12 NIV). Few preachers enjoy preaching on persecution but Paul promises, “everyone who wants to live a godly life in Christ Jesus will be persecuted (2 Timothy 3:12 NIV). We must go through many hardships to enter the kingdom of God (Acts 14:22) Believers are also promised that the world will hate them (John 15:18), that troubles will come in this world, “In the world you will have tribulation,” (John 16:33), that their own family might hate them (Matthew 10:35), that suffering would come (1 Peter 3:14), that the believer would “suffer for his sake” (Philippians 1:29), and that God would discipline them (Hebrews 12:10). Christians are encouraged to rejoice even in the midst of suffering, “Dear friends, do not be surprised at the painful trial you are suffering, as though something strange were happening to you. But rejoice that you participate in the sufferings of Christ, so that you may be overjoyed when his glory is revealed” (1 Peter 4:12-13).

The Apostles suffered greatly as they preached the Gospel. Peter was crucified upside down on a cross, Andrew was crucified on a cross in Patrae, James the son of Zebedee was put to death by the sword in Jerusalem by King Herod (Acts 12:1-2), John miraculously emerged unhurt from a cauldron of boiling oil, and later he was exiled to the island of Patmos. Philip was crucified during the reign of Dominian, Bartholomew was skinned alive, Thomas was stabbed to death with a spear by Hindu priests, Jude was run through with a spear, and Simon the Zealot was sawn into pieces. Paul’s head was chopped off.

Did the Apostles suffer as they spread the Gospel? Yes, but their suffering and martyrdom was a result of Satan’s plan, not God’s best for their lives. Have I suffered as I have traveled around the world preaching? Yes, I have been shot at, had a gun pointed at me, my plane has caught on fire, I’ve had rocks thrown at me as I preached, been sick, and I’ve slept on dirt floors with bugs crawling over me all night. But, God caused none of this suffering. God is a good God and He has good plans for His children.

Some Christians are persecuted and even executed for their faith, but that is not part of God’s plan for their lives. It is the result of terrorists. Don’t blame God for the evil that exists in this world. Sometimes, God’s perfect plan does not always come to pass. God desires all men to be saved (1 Timothy 2:4), yet not all are saved. Sometimes, because of the sinful world that we live in, God’s plans do not fully come to pass, but this does not mean that God is actively planning evil for our lives or that He wills anything but the best for our lives.