If I were preaching at a Gospel Festival in a foreign nation at Christmas time, this is the message I would preach. I hope this simple truth blesses you today.

Two thousand years ago, a tiny baby was born in the city of Bethlehem. He was born in a stable amongst the 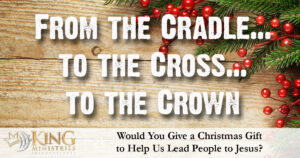 animals and He was laid in a manger. His earthly father was a poor carpenter named Joseph and His mother was a virgin girl named Mary. The baby’s real Father was God Himself. Mary named the child, Jesus. But, the baby had another name. He was also called Immanuel, which means “God with us.” That baby was the king of kings. He was God Incarnate, the Creator of the entire universe. Yet, He humbled Himself and became a man. The baby deserved global fanfare, but only some shepherds came to see him.

God became a man because He wanted to save people from their sins. The first man and woman, Adam and Eve, sinned and this sin separated people from God. God’s Book says, “All have sinned and fallen short of the glory of God.” Sin is when we disobey God’s commands. Lying, stealing, and coveting are examples of sin. Every single person has done something wrong. We have all sinned. Sin separates us from God.

Over the centuries, people have tried many different ways to get reconnected with God, but none of them were successful. Some people thought money would buy them a place in heaven, but no amount of money is enough. Others formulated religious rituals in an effort to get to God, but the rituals were useless. Others thought they could find a way to God if they became smart enough, but their study was wasted. Since it was impossible for people to get to God, God decided to become a human being and come to us. Jesus was born in order to provide a way for us to have a relationship with God.

God’s book says, “The price for sin is death, but the gift of God is eternal life through Jesus Christ.” Because of our sins, we deserve to die and to be eternally separated from God. But, God does not want us to separated from Him, so He sent his only Son Jesus Christ to be born here on earth. The Bible says, “For God so loved the world that He gave His only begotten Son, that whoever believes in Him should not perish but have everlasting life.”

Jesus never sinned. He lived a perfect life. He did not deserve to die, but He gave up His life to provide a way for people to be saved. Jesus stretched out His hands and He was nailed to a cross. His death paid the price for your sin. The cross that Jesus died on is the bridge between heaven and earth. He died so that we can live.

But Jesus did not stay dead. After three days, Jesus rose from the dead! Today, Jesus is alive. He is sitting in heaven with a crown on His head. He is now the Lord of Lords.

God’s Book says, “Everyone who calls on the Name of the Lord shall be saved.” If you will cry out to Jesus today, He will save you from your sin and you will be perfect and holy before God. The Bible promises, “if you confess with your mouth the Lord Jesus and believe in your heart that God has raised Him from the dead, you will be saved.”

If you want Jesus to forgive your sins, I encourage you to pray this prayer: “Dear God in Heaven, I believe Jesus died on the cross. I believe Jesus rose from the dead. Today, I chose to make Jesus the Lord of my life. I repent of all of my sin. Please forgive me. In Jesus Name, Amen.”

During the holiday season, it is important to remember that Jesus is the Reason for the Season. Thank you for helping us take the message of hope and salvation to people around the world. It is because of your faithful giving that people are being saved.

Would you give a financial gift today to help us reach people for Jesus? There is no better Christmas gift than an eternity in heaven. Click Here to Give Now: https://kingministries.com/donate/