How Do You Use Your Words? 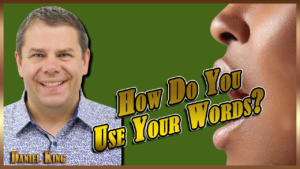 I am harvest focused. My passion is for souls. But recently, I was attacked on the blog of a self-appointed church watchdog. With his words, the blogger assailed me. He tore my ministry down. He questioned my integrity, my motives, my theology. The worst part of the assault was his misuse of Scripture to beat me up.

He used his words and God’s word as a sharp sword to cut me to pieces. After I finished reading his four thousand-word diatribe, I felt like a flayed fish, cut to pieces and laid out on a sizzling frying pan to cook. I am a big boy, I can handle the criticism, but my story illustrates an important point.

All too often, some people in the church use their words to cut others down, to attack, to injure, to hurt, to curse their brothers and sisters. In a misguided passion for truth, they even use God’s Word as a dangerous weapon to put down other believers.

Turn Your Verbal Swords into Plowshares

The Word of God is like a sword. But it is designed to be used to attack Satan, not your brothers. Christians need to stop stabbing other Christians in the back and use their weapon for its proper purpose.

In the Garden of Gethsemane, Peter took out his sword and cut off the ear of Malchus, the servant of the high priest. Jesus bent down into the dirt, picked the ear up, and miraculously reattached it. All too often, preachers have wounded and maimed people with their insensitive, sword-wielding way of preaching of the word of God. When preachers use their words as swords, they metaphorically cut off the ears of the people they are attacking. With their spiritual ears cut off, these people become unable to hear what the Spirit is saying.

This is what happened to the religious leaders in Jerusalem. Right before he was stoned, Stephen accused them of being stubborn and uncircumcised in both heart and ears (Acts 7:51). The Pharisees and Sadducees had so much political infighting that their spiritual ears were deafened and they failed to recognize the Messiah they were waiting for.

While churches are busy attacking other churches and denominations, there is a world full of people who are going to hell. Dying humanity is crying out for help. Will the church hear their plea?

The prophet Micah prophesized that in the last days nations would beat their swords into plowshares (Micah 4:3). What was once used for war would be turned into a tool for bringing in the harvest. It is time to beat our swords into plowshares. Rather then using God’s word as a weapon for attacking others, we should use our words to encourage others to go after the harvest.

Jesus is coming soon. We need to make every second count for God. I believe the greatest harvest of souls in history will happen in the next few years. More people will be saved in the next decade then were saved in the first two thousand years of church history.

But, in order for this great harvest of souls to take place, we must stop using our words to attack each other. Instead, we must use our words to encourage one another to go after the harvest. Our words can be used either as a weapon of war or as a tool for bringing in a harvest of souls.

How will you use your words?