How to Develop Good Habits 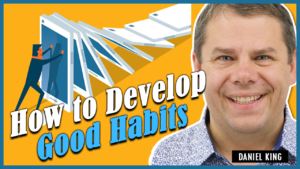 Your life is the sum of all your habits. Every area of your life has been shaped by your habits. Habits, both good and bad, create who you are.

My health is the result of my habits.

My wealth is the result of my habits

My books are the result of my habits.

My weight is the result of my habits.

My friendships are the result of my habits.

My productivity is the result of my habits.

First, you form habits, then habits form you. After you develop a habit, you become a servant to that habit.

When I first started writing, I was a horrible writer. But I decided to spend one hour every day typing on my computer. At first it was torture, but eventually I started to get better. Now, I have written fourteen books mainly because I forced myself to develop the habit of writing.

A habitual action becomes a well-worn groove in your mind. Like an old fashioned record player where the same song plays every time the needle drops, your mind eventually plays the exact same tune over and over again. As a sign said on a particularly bumpy road, “Pick your rut carefully, because you will be in it for the next two hundred miles.”

If you are satisfied with your life, congratulations, you have good habits. If there is some area of your life you are no happy with, change your habits.

The good news is that habits can change. Mike Murdock says, “Anything you do twice becomes easier to do again” Experts say, “If you do something continually every day for thirty days, it will become a new habit.” Small daily changes will eventually add up to huge changes over the course of your lifetime. Tiny stones thrown on a pile in time become a big mountain.

How to Change Your Habits

The best way to begin changing your habits is by changing your thinking. “Do not conform any longer to the pattern of this world, but be transformed by the renewing of your mind…”(Romans 12:2). The pattern of this world is a set of habits. This pattern of habits is often called the rat-race of life. It is composed of the continual search for another dollar, the lusting after wrong things, the coveting of a neighbor’s worldly goods, or the search for adventure; all of these things form a pattern of habits. People wake up in the morning, and they race through the day, thinking only of themselves, and then they fall into bed at night without accomplishing anything. Every day, God is not acknowledged, and the person continues to live a life of sin, day in and day out, for an entire life.

A change of habits will only come with a change of mind. This change of mind must occur through God’s word. The only way to renew your mind is by knowing God.

When you renew your mind with God’s word, you begin to think like Jesus. When you think like Jesus, you act like Jesus. Suddenly, habits change. The worldly pattern of lying, cheating, stealing, coveting, and hatred is suddenly transformed.

A new set of habits begins to form in the place of the old habits. The habit of loving others, the habit of being thankful, the habit of worshiping God; these are the habits of a person whose mind has been renewed by the word of God. Focus shifts from, “me, me, me” to “God, God, God” The question changes from “What do I want to do?” to “What does God want me to do?”

What Does the Bible Say About Habits?