How to Spark a Revival 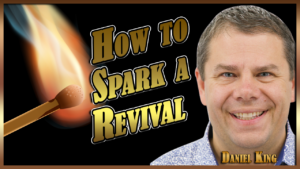 In 1859, Charles Darwin wrote a book entitled “The Origin of Species.” Although this book destroyed the creationist viewpoint in the minds of many modern day scientists, there is something which can be learned from Darwin’s theories. The central tenet of the theory of evolution is the concept of  “the survival of the fittest.” This theory explains how gradual development brings change in the evolutionary process. According to Darwin, species change because only the fittest, smartest, or fastest animals survive the struggle of life.  Species with favorable traits survive longer then species with less favorable traits. The animals with superior traits live longer and produce more offspring who carry on the better traits.  The fittest animals become dominant in life’s game.

In the business world, we often see the principle of the “survival of the fittest” at work. Corporations who sell goods inexpensively with better service last longer then corporations who do not listen to the desires of their customers. Competitive companies survive longer in the corporate jungle.

A similar principle is at work in the spiritual world. In Darwin’s theory the strongest animals are the most likely to survive; in the same way, in the spiritual world, the strongest Christians are the ones most likely to see a move of God. God moves among those who are spiritually fit. Many people desire revival in their personal lives and churches, but only those who are spiritually ready will experience revival. I call this concept “revival of the fittest.” Revival will come to those who have built their spiritual survival skills.

There are several keys to becoming spiritually fit. Here are some concepts which can prepare you for revival.

Pat Robertson says that the best definition for revival can be found in the words of a song “Turn your Eyes upon Jesus.”

Turn your eyes upon Jesus,

Look full in His wonderful face,

And the things of earth will grow strangely dim

In the light of His glory and grace.

The first step towards revival comes when we turn our eyes toward Jesus. When we look him in the eyes, the glory and anointing of God invades our hearts and the trivial details of life become unimportant.

When we see Jesus, a new standard is set for us to imitate. The perfection of Jesus causes us to notice the dirty condition of our own lives and the sin which was once considered normal becomes abhorrent to us. As Job said, “My ears had heard of you but now my eyes have seen you. Therefore I despise myself and repent in dust and ashes” (Job 42:5-6).

After George Bush was elected in 1988, he gave a speech that made some American farmers upset. In that speech, he mentioned that he did not like eating broccoli and that he would not allow anyone to bring any broccoli into the White House since he hated it so much. He said that when he was a kid, his mom made him eat it, but now that he was President, no one could force him to eat the green vegetable. Of course, all the broccoli farmers were mad at him and a couple of weeks later they sent an entire semi-truck full of broccoli to the White House. George Bush thanked them and promptly gave the broccoli away to a non-profit organization that feeds the poor. President Bush did not allow a single piece of broccoli into his house. Why? Because he abhorred the stuff.

If we will abhor sin, we will not allow a single sinful desire into our brains. God absolutely hates sin. He hates it so much that he refuses to stand in the presence of sin. When we spend time with Jesus, we begin to hate sin as well. Revival will not come until we hate sin so much that we remove every vestige of sin from our lives.

Sinful desire are like flies buzzing around one=s head. A fly will buzz right in front of your face and then have the boldness of land directly on your nose. You swat it away, but as soon as you go back to working, the fly lands again. Giving into sin is like allowing a dirty, germ filled fly to walk across your face. Just as you continually shoe the fly away, you must also continually rid your mind of sinful thoughts. You will not be free from that sinful desire until you kill it

The power of God is the flyswatter that kills sin. This power can change the lives of prostitutes, drug addicts, liers, alcoholics, and those addicted to pornography.  Satan may be the king of the flies, but we have a Holy Spirit fly swatter to put him in his place.