Lessons from the Fall of the Berlin Wall

On November 9, 1989, the Berlin Wall was torn down in Germany. When this hated symbol of Communism fell, the nations of the Soviet Union began to radically change. What are some lessons from this historic event? 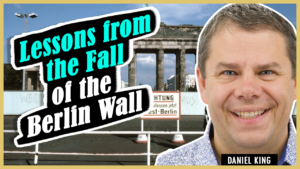 1. Every Wall Will Fall From the early ‘50’s until the late ‘80’s, godless Communism was at war with Christianity. From the middle of Europe to the edge of Asia, there was a vast swath of land where the Name of Jesus could not be lifted up. Churches were closed, christians were persecuted, and faith was attacked. But then in a moment, the wall was down and the Iron Curtain was torn apart. For decades, it seemed impossible for the Gospel to penetrate into communist areas, but in an instant, the situation changed. Only a few years after the Berlin wall fell, I stood in front of the Museum of Atheism in St. Petersburg, Russia and preached. Hundreds of people stopped to listen without fearing a visit from the KGB. Today we face many new walls in the world. Islam has erected a wall around the Middle East in order to prevent Muslims from hearing the Gospel. China is open to doing business with the West, but still restricts people from freely following Jesus. Secularism here in our own nation continually tries to strengthen a wall of separation between church and state. Eventually, the walls that we face today will fall. One day, every knee will bow before the majesty of God. I believe that in my lifetime, the wall of Islam will fall just as hard as the wall of Communism fell twenty years ago. The time will come when we will be able to freely preach the Gospel in every corner of the earth. 2. When Walls Fall, the Church Must Be Ready.When the Berlin Wall fell, nations closed for decades were suddenly open to the Gospel. Some ministries were ready and immediately took advantage of the newly-opened doors, but far too many missed the opportunity. I fear today that the body of Christ is not ready for new walls to fall. Would we be able to disciple one hundred million new Chinese believers? What would we do if we could suddenly plant churches in Saudi Arabia? What if the trade embargo around Cuba was lifted? Who is ready to go into North Korea? Could we care for ten million Muslims who decided to become Christ followers? When walls fall, there is an opportunity for sharing the Gospel that must not be missed. Immediately after World War II, General Douglas MacArthur sent a telegram to the churches of America asking for missionaries to come to Japan. Only a handful of missionaries responded. Today, Japan has adopted the Western principles of democracy and free trade, but the Church is still weak in Japan. They adopted everything about our culture, except our religion. What would have happened if ten thousand on-fire believers had gone to Japan immediately after the war? I think Japan would be a Christian nation today. In Japan we failed, but in Ethiopia history tells a different story. When Communism fell in Ethiopia two decades ago, the nation was only 3% evangelical Christian. But, because of the efforts of many missionaries, today over 20% of the population are evangelical believers. This success can be duplicated in other nations if the Church is ready when the walls come down. 3. We Can Bring Walls Down. The Berlin Wall fell because of President Ronald Reagan’s bold demand, “Mr. Gorbachev, tear down this wall.” Ronald Reagan stood against the tyranny of Communism, and because of his refusal to give up, a great battle was won for freedom. When Joshua faced the thick walls of Jericho, God gave him a plan to bring those walls down. We face many ideological, political, and cultural walls today, but God has a plan for bringing down those walls. We must go to closed nations, preach where Christ is not known, use technology to reach an internet generation, and look for creative new ways to communicate age-old truth. If we will continue to obey God, then the walls we face today will fall down.