My entire family gathered together last week for a family reunion. For one of our activities, we visited a full-size replica of Noah’s Ark in Kentucky.

This recreation of Noah’s Ark is built to the exact dimensions of the Biblical Ark and it is now the largest wooden structure in the world. Inside it tells the story of Noah and why God destroyed the earth with a flood.

As I walked through the Ark with my wife and children, it struck me how many parallels there are between Noah’s day and modern times.

Genesis 6:5 reads, “The Lord saw that the wickedness of man was great in the earth, and that every intent of the thoughts of his heart was only evil continually.” The wickedness of Noah’s day grieved God’s heart and He decided to send a flood of judgment upon the people. 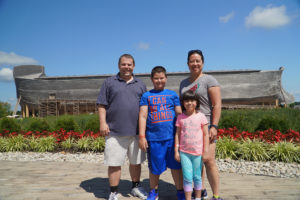 If you have been watching the news, you might have noticed that there is still wickedness in the earth today. As God looks down upon the earth, I am sure He is still grieved by sexual immorality, hatred, racism, theft, and rebellion against authority.

In fact, sin grieves God so much that He has decreed that sin must be punished. The Bible tells us, “the wages of sin is death” (Romans 6:23). God punished the people of Noah’s day by sending a catastrophic flood that wiped out every living creature on earth.

But, the good news is that God provided a way for the people of Noah’s day to be saved. Though there were many wicked people on the earth, “Noah found grace in the eyes of the Lord” (Genesis 6:8). Because God is full of grace, He commanded Noah to build the Ark.

It took Noah one hundred and twenty years to build the giant ship. The entire time he was building Noah warned his friends about the flood that was coming but they laughed at him. They had never seen rain or a flood before and they probably thought it was absurd to build a giant boat so far from a river or an ocean.

Just as the Ark was a way to salvation in Noah’s day, God has provided a way for people to be saved today. Jesus said, “I am the Door. If anyone enters by Me, he will be saved…” (John 10:9). Jesus, the Son of God, died on a wooden cross and paid the price for the sins of all mankind. Jesus did not deserve to die because He was innocent, but He willingly gave His life as a sacrifice for our sins.

But, Jesus did not stay dead. After three days, He rose from the dead and He is alive today. He is now the Door that leads to salvation. Anyone who comes to Jesus and asks Him for forgiveness can be saved from sin!

Jesus is the Door

The door to heaven stands open, but the door must be entered. Multitudes in the time of Noah refused to enter the Ark. They could have been saved from the flood but they turned their back and walked away.

The situation is similar today. The day of God’s judgment is coming but God is extending a hand of grace to every human. Some will walk away from Jesus, but there will be many who will be saved!

Our ministry is similar to the ministry of Noah. We call sinful humanity to enter through the door of salvation. We warn people of the dangers of sin and we invite them to come into the safety of Jesus’ arms. The work we do is urgent. Sin and spiritual rebellion is increasing in the world today, but at the same time God’s grace is increasing too. This is the day of salvation and we must work to convince as many people as we can to enter through the door of salvation before it is too late.

Thank you for helping us bring people to Jesus – the only Door to Heaven!