What I learned from the Sequoia Tree 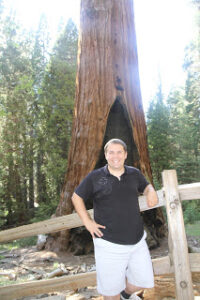 Recently, I visited Sequoia National Park in eastern California. There one can see the largest living tree (by volume) on earth. Here are some of the lessons I learned.

The oldest of the Sequoia trees is 3,200 years old. The tallest grows to 311 feet. They weigh up to 2.7 million lbs. Their bark grows up to 31 inches thick. The branches at eight feet in diameter are bigger than the trunks of most trees. The base can grow up to forty feet in diameter, that means more than twenty people would need to join hands in order to encircle the tree. The cone is about the size of a chicken’s egg and this massive tree grows from a seed the size of an oat flake.

You might come from a small beginning, but you have the potential to be the best in the world at what God has called you to do. You can tower above all the other trees in the forest if you simply refuse to give up. The definition of the word “excellence” is “to surpass, to be the best, to be a champion, to exceed, to be exceptional, to be unsurpassed, to be top notch, to tower above all the rest.” You can achieve excellence if you just stick with your assignment long enough.

After the Sequoia groves were declared a National Park, the Forest Rangers worked diligently to protect the big trees by trying to banish fire. Every 5-10 years lightning started a fire and the forest service always rushed to put out the fires.

But after a few decades, the Rangers began to see unwanted consequences of the fire suppression. The trees stopped reproducing. It turns out that fire is an important part of the lifecycle of the Sequoia tree. Each year each tree produces up to 2,000 egg-sized cones that contain up to 400,000 seeds. The seeds are released only when the cones open. The cones hang green and closed on the trees for up to twenty years. A few seeds may be scattered by squirrels, but the heat from a fire is needed to make the cones dry out, open up, and drop seeds. Plus, the fire clears out the underbrush from around the mama tree and leaves ashes to act as fertilizer. 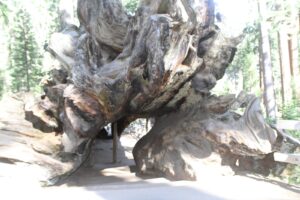 Many people have a lot of dead wood clogging up their lives. This old, dead growth prevents them from planting new ideas or experiencing new growth. Sometimes, God brings us through a period of fire in order to prepare us for new growth. Our greatest victories often follow a time of supernatural pruning. The ashes left over from our past are used by God to fertilize our future growth.

The wood and bark of a Sequoia tree naturally grows a special chemical that makes the trees resistant to insects and fungi. This makes them almost immortal. As long as they are standing, they never stop growing. But, they do have one weakness in their roots. These mighty trees actually have a very shallow root system with no taproot. Ninety percent of the Sequoia roots are within three feet of the surface of the earth. Their roots extend broadly but they do not grow deeply. Soil moisture, root damage, erosion, and strong winds can cause these giants to topple over.

Many people look they are impervious to the devil’s attack on the outside, but in reality they are vulnerable because their roots do not extend deeply into the ground. To maintain a great height, one’s roots must extend equally far underground.

A young Sequoia tree does not even look like a tree, instead it looks more like a bush. It grows on the ground as a bush for 8-10 years before it starts shooting up. Fifty years later, it is a tall slender tree. Every year the tree continues to grow taller and broader and it is only after 2,000 years that the tree has a right to be called “the biggest tree in the world.”

I’m sure you remember the story of the tortoise and the hare. The rabbit starts the race much quicker than the turtle, but a 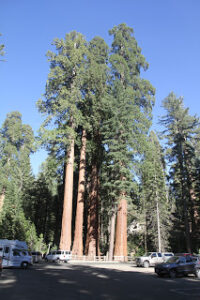 fter a while the rabbit gets distracted. The little turtle keeps inching toward the finish line, slow and steady. By the time the hare tries to catch up, it is too late. The slow tortoise beats the rapid rabbit by simply putting one foot in front of the next, over and over again.

The white pine tree can grow to full height in twenty years, but then it dies just as quickly. You are in a marathon, not a sprint. It is better to be a long-term success than it is to be a flash in the pan that fizzles out in a few short days or years.

The west slope of the Sierra Nevada Mountains between an elevation of 5,000 and 7,000 feet is the only place in the world where the Sequoia trees grow. In order to flourish, they need the right amount of sun, water, and the perfect weather. No other place on earth has been found where this magnificent tree can naturally grow to such an enormous height.

The biggest Sequoia tree was over 90 feet in diameter. In 1852, George Gale discovered the tree and cut off the bark in order to show people in the eastern United States the size of the tree. Without the bark, the tree eventually died. George’s greedy desire to make a few dollars off the world’s largest tree killed the 2,500-year-old tree.

Watch out for those who try to steal in a moment what took you years of effort and toil to create. There are a lot of people out there that do not care for you. All they care about is what they can quickly take from you. Stay away from them, lest your greatness be compromised. 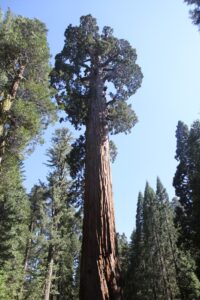 The Sequoia tree grows from a seed the size of an oat flake. Contained in that tiny seed is the DNA for the biggest tree in the world, but you would never know by looking at it. Impressive endings often come from small beginnings.

God wants us to sow seeds everyday. Your small seed has the potential to give you a mighty harvest. The seed you sow determines the harvest you grow. I encourage you to sow a seed into our ministry today. Even if you do not have much, your small seed can bring you the greatest harvest of your lifetime. Sow today!