“Can we go too fast in saving souls? If anyone still wants a reply, let him ask the lost souls in Hell.” -William Booth 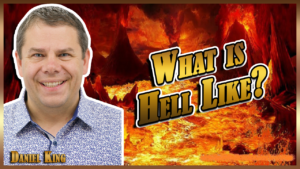 Is hell a real place? Jesus thought it was. Jesus told a vivid story about the horrors of hell. Once there was a rich man who always dressed in the best clothes and feasted everyday on the best foods and wines available. At his front gate there was a beggar named Lazarus who suffered from open sores on his skin. Everyday Lazarus waited by the gate, hoping to be fed with the leftovers from the rich man’s table. His only relief was when the rich man’s dogs came and licked his sores. One day, both the beggar and the rich man died. The beggar went to heaven. The rich man went to hell. As the rich man was being tormented in the fires of hell, he looked up and saw the beggar in heaven, standing next to Abraham. He shouted to them, “Father Abraham, have mercy on me and send Lazarus to me. Have him dip the tip of his finger in water and touch my tongue; for I am tormented in this flame.” Abraham replied, “Between us there is a great chasm, so that no one can pass from heaven to hell, or from there to here.” Then, the rich man became concerned for his five brothers who were still living. He begged Abraham, “I beg you therefore, father, that you would send Lazarus to my father’s house, for I have five brothers, that he might testify to them, and prevent them from coming to this place of torment.” Abraham refuses the rich man’s request, saying, “If your brothers have not heeded the words of Moses and the prophets, then they will not listen to Lazarus, even if he comes back from the dead.” In this story, we find a soul winning call from the pits of hell. If we could hear the voices of people who have gone to hell, they would shout with all their might, “DON’T COME HERE.” Some theologians have dismissed this vision of hell by saying it is nothing but a parable. It is not a parable, it is a horror story about a reality that lays just beyond death’s door. Other theologians have tried to soften the threat of hell by saying that hell is simply a state of nothingness. But, for this rich man, hell is a genuinely horrible place. This man has his senses, his memory, his reason, he is thirsty, he is in torment, he can think, he is concerned about his family members who are still alive. Our society often says that hell is one big party, a place for old friends to get drunk together for all of eternity. But, according to Jesus, hell is not a party, it is torment. This man suffers from such agonizing thirst that he begs for just a drop of water to be placed on his tongue. In this horror story, we hear a soul winning call from hell. The rich man is begging for someone to go tell his family that hell is a real place. If the dead could speak, they would warn us of the dangers of hell. This is how I know psychics are fake. When psychics claim to talk to voices from “the other side,” those voices always have nice things to say. If psychics really spoke to dead people, many of those people would be shouting, “Hell is a real place. Tell my relatives to get their lives right with God.” By the way, did you hear about the psychic who recently went out of business? Yeah, she should have seen it coming. If the church really had a revelation about the reality of hell it would “light a fire” under us to be soul winners. If you spent just ten seconds in hell, how motivated would you be to rescue people from such a horrible fate? What is hell like? The wicked shall be cast into hell (Psalm 9:17). Hell is a place of torment (Luke 16:28). Hell is a place of fire that is never quenched (Matthew 5:22; 18:9; Mark 9:43). Hell destroys the soul and the body (Matthew 10:28). Hell has worms that do not die (Mark 9:45). Hell is a place prepared for the punishment of the devil and his angels (2 Peter 2:4). Jesus has defeated hell (1 Corinthians 15:55). Jesus took the keys of death and hell (Revelation 1:18). Anyone whose name is not found in the book of life will be cast into hell (Revelation 20:15).