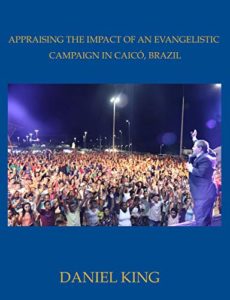 I recently finished my Doctorate of Ministry degree at Oral Roberts University. I used our recent Brazil crusade as my research project and I did a survey of a random cross section of people at the crusade. The project was designed to give a snapshot picture of an evangelistic crusade. The goal was to discover who came to the crusade, why they came, and what impact the crusade had on the city.

Here are some of the stats from the crusade. Caicó, Brazil has a population of 66,246 people. The nine evangelical churches in the city have 1,357 believers which equals about 2% of the population.

How Many People Were Saved? 82.6% of the crowd repeated the prayer of salvation with me. 641 people filled out decision cards. This represents a 43% increase in the number of Christians in the city.

Was the Crusade Worthwhile? 100% of the pastors agreed that the crusade was worth the time, money, and preparation.

How Many People Did We Impact? Our team ministered to a total of about 7,792 people at the crusade. Our three-day soul winning conference was used to train local believers in how to pray for the sick, cast out demons, and lead people to Jesus. By the third night of the soul winning conference, 485 believers were in attendance. The church where the meeting was held was completely full and we filled the street in front of the church with chairs for the overflow crowd. 792 young people attended the youth concert. 504 children were in attendance at the children’s festival.

Why did People Come to the Crusade? 460 people responded to the question “Why did you come to this meeting?” 107 said, “My friend invited me.” 77 said they were curious about what was happening. 44 wanted to hear the music. 116 said they needed a miracle. 106 said they wanted to see miracles. 61 came because their pastor told them they should come. 112 came because they are curious about God. 6 did not know why they came and the rest gave some other reason why they came. These “other” answers include: Jesus called me, to seek the presence of God, because I am an evangelical, because I wanted to, because my wife invited me, I came to seek God, because I had a need, and because someone asked me.

I’m sorry if I overwhelmed you with numbers in this post but the truth is that numbers are important. God even named a whole book in the Bible, “Numbers.” The reality is that every number represents a story. Every statistic stands for a person. At the crusade in Caicó, Brazil many people were touched by God, saved, and healed. You played an important part in making that happen! Thank you for your prayers and your giving.