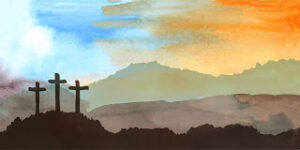 I am struck by the story of the two thieves that were hung on either side of Jesus. “When they had come to the place called Calvary, there they crucified Him, and the criminals, one on the right hand and the other on the left…Then one of the criminals who were hanged blasphemed Him, saying, “If You are the Christ, save Yourself and us.” But the other, answering, rebuked him, saying, “Do you not even fear God, seeing you are under the same condemnation? And we indeed justly, for we receive the due reward of our deeds; but this Man has done nothing wrong.” Then he said to Jesus, “Lord, remember me when You come into Your kingdom.” And Jesus said to him, “Assuredly, I say to you, today you will be with Me in Paradise” (Luke 23:33,39-43).

There were three crosses that stood on Calvary. Jesus was in the middle. On his right was a criminal who became a saint and went to heaven. On his left was a mocking criminal who went to hell.

These two thieves represent all mankind. Jesus died for thieves. The truth is that all of us are just as guilty as these two men. “There is none righteous, no not one” (Romans 3:10). The Bible says, “all have sinned and fall short of the glory of God” (Romans 3:23).

These two thieves probably had a history together. It is possible they were arrested together and had a trial at the same time. Not only were they thieves, they could have been murderers too. Do you remember the story of the Good Samaritan when the man “fell among thieves?” This scenario was a common occurrence back in those days. It was common for thieves to lay in wait for a lonely traveler and to take everything he owned and even to threaten a person’s life. The two thieves were working together and taking people’s money. Now they have been caught and they are paying the ultimate price for their mistakes.

The two thieves were both bad men but they responded differently to Jesus. I doubt either of them ever went to one of Jesus’ meetings. But, they heard Jesus say, “Father, forgive them, for they do not know what they do” (Luke 23:34). These words of forgiveness really impressed one of the thieves. But, the other thief was not moved at all. He was so lost in his sin that he was unable to recognize goodness.

One saw a criminal, the other saw a King.

One saw a simple man, the other saw God’s perfect Son.

One got what the punishment he deserved, the other got the forgiveness he didn’t deserve.

One experienced judgment, the other grace.

In the same way that there was hope for this thief, there is also hope for you and for every sinner. I am just like that thief who said “Yes” to Jesus. I am not going to Heaven because I have preached to great crowds or read the Bible many times. I’m going to Heaven just like the thief on the cross who said in his last moment: “Lord, remember me.”

Aren’t you glad that you are a “yes” thief? The Bible says, “everyone who calls on the name of the Lord shall be saved” (Acts 2:21). This is the simplest form of salvation, to recognize that one needs help and to cry out to Jesus. For the thief on the cross there was no time for baptism and no time for discipleship lessons. The man was saved because he cried out to Jesus in the time of his greatest need.

The fact that Jesus can save a thief who is hanging on a cross tells me there is hope for every sinner. No matter what you have done in the past, you can have a wonderful future with Jesus Christ. Even if you are a thousand steps away from God, it is only one step back. This is the message we preach around the world and I thank you for helping us to point people to the Savior hanging on the middle cross. It is through Jesus that everyone can be saved!