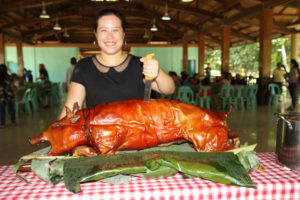 Jessica King | Missions in the Philippines

Thank you for sending us to the Philippines to preach the Gospel. Because of your generosity; pastor’s were encouraged, young people caught the fire of God, and souls were saved. This was our first trip to the Philippines and we loved it.

My wife Jessica is frequently mistaken for a Filipina, a woman from the Philippines. Ever since she was young, random Filipino people come up to her and start talking to her in Tagalog because they think she looks like she is from the Philippines. Jessica always smiles and replies in English, “I’m sorry, I don’t understand you. I’m actually from a Chinese background, but I love the people of the Philippines.” Since she looks like many Filipino people she was instantly accepted and celebrated on this trip.
On this trip we had the privilege of speaking at a youth conference, a pastor’s conference, and a crusade. We were invited by Our God Reigns Ministries which is led by Don and Barbara Arney. They have served God in the Philippines for over twenty-five years. They have a network of churches on the island of Mindanao which is the second largest and southernmost island in the Philippines. About 20.44% of the island’s population is Muslim.
At the youth camp, we were impressed with the passion of the young people for God. They stretched out their arms and cried out for a touch from God. Tears and laughter filled the auditorium as the Holy Spirit began to move. It was so awesome to see their hunger for God. On of our team members, Matthew Triggs (a friend of Jessica’s from Bible school) wrote, “Many of the campers were from remote tribal areas. Every service the altar was packed with about 200 youth as they were saved, transformed, and filled with the Holy Spirit! The Holy Spirit was moving so strongly that teenagers were falling out in the power of God everywhere. It was one of the most refreshing and anointed camps I have been a part of in a long time.”
It reminded me of when I was fourteen years old at a youth camp. I was crying out to God and I had a vision of myself standing on a platform and preaching to people of every color and language. Today, that vision that I had at the age of fourteen has come to pass. From personal experience, I know that the work that God began in the lives of the Filipino youth will continue for many years to come.
The pastor’s conference was a time of refreshing, encouraging, impartation, and training for these front-line shepherds who have dedicated their lives to ministering in out-of-the-way villages in the hardest-to-reach area of the Philippine islands. They are giving their lives for the sake of the Gospel. It was a privilege to spend time with them.
The theme for the conference was Isaiah 60:1, “Arise, shine; For your light has come! And the glory of the Lord is risen upon you.”
This is what some of the pastors had to say about how the conference impacted their lives:
Pastor Joe Ohao: I learned things about the life of God, how God use me, how God empowered me for the ministry…[I received] more fire during this conference.
Pastor Edwin Mapilisan: Because of this conference, I am expecting greater things. I had a revelation for another level for the ministry.
Pastor Julian Panduyos: I feel that God wants us to go deeper in His love…and arise in our calling.
Pastor Bobbie Cuenca: The conference was a real blessing. This conference is encouraging pastors…
A Crusade meeting was held in Tandag, Surigao del Sur. At the last moment, the mayor of the city moved the location of our crusade and most of the people in the city did not know where to come. Despite the confusion, Daniel and Jessica preached God’s Word with boldness and lives were changed for eternity.
https://youtu.be/-ZSTe-5FLU8
COUNTRIES
LIVES CHANGED
THE BLOG
YOUR IMPACT